Can RSMS visa be canceled? 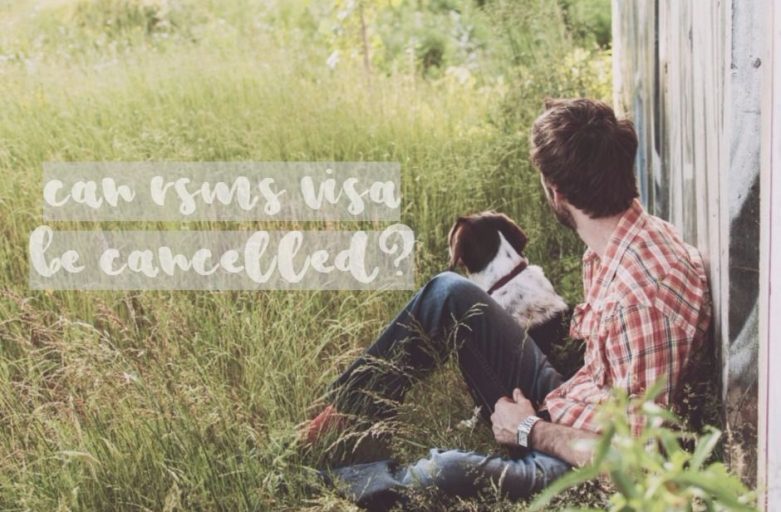 Can RSMS Visa be Canceled?

It’s important to highlight at the outset that a visa – not just the RSMS subclass, but any type of visa, for that matter – serves as a permit for you to enter and leave a country of which you are not a citizen.  As such, it carries certain conditions that you must follow while you are in the territory of the issuing country.  Furthermore, failure on your part to abide by those conditions will result in some forms of punishment, and one of those is the cancellation of the visa.

We think it’s just normal and fair.  The host country proves generous and hospitable to you but you fail to hold up your end of the bargain, it’s just but proper that the former cuts the deal short.

So, yes, a Regional Sponsored Migration Scheme (subclass 187) visa, more popularly known as RSMS visa, can be canceled, which may lead to your deportation or removal.

As to the circumstances leading to its cancellation, let’s discuss them in a bit.  In the meantime, let’s talk about one of the most common questions RSMS visa holders and applicants throw at us: Do I need to stay with my employer for two years?

Do You Need to Stay with Your Employer for Two Years?

Indeed, are you required to serve your sponsoring employer for two years after the visa is approved?

Please bear in mind that in the visa application form, you are required to declare your intention to work in the nominated position for at least two years.  This goes without saying that when you file your application, you hold the intention to work for the nominating employer in your capacity as stated in the agreement for at least two years after the visa is granted.

It requires further that you maintain the same intention until the decision on your application is handed down.  If, however, in the event that you change your mind before the filing of your application or while the application is being processed and you no longer want to honor the stipulation on the agreement, you should do either of the two options:

One, don’t lodge the application if you have yet to submit it.  Two, you inform the Department of Immigration and Border Protection (DIBP) of the sudden change of plan.

One common reason the Australian government turns down your application is when you, as the applicant, or any member of the family you include in the application or even third parties acting on your behalf provide – or have provided in the past applications – false or misleading information or fake documents either wittingly or unwittingly.  Not only that: you may be subjected to a three-year ban from obtaining the visas affected by the fraud.  If a visa has already been granted, it may be canceled.

Let’s now discuss the reasons why RSMS visas are canceled.

First off, section 137Q of the Migration Act 1958 empowers the DIBP to cancel RSMS visas (subclass 187) under certain circumstances.  But two reasons stand out among the many as to why such visas are canceled.  These are:

How Can the DIBP know?

In most cases, your employer serves as the trusted source of the immigration people in finding out that you have been remiss in observing the stipulations on your visa.  They will be the one to inform the proper authorities that you either fail to commence employment or you end your employment before you have completed the prescribed two-year length of service.

Apart from your employer, the other sources of information of the DIBP may include other government departments and line agencies such as the Australian Securities and Investments Commission, Centrelink, Australian Taxation Office and others.

As a visa holder, you are not obliged to inform the Department about the termination of your employment.  Hence, it’s the government agency tasked to oversee the status of non-citizens living in the country that would determine your case.

How Is ‘Genuine Effort’ Assessed?

In case the DIBP decides to proceed with the investigation as regards your case, they would look into the following compelling and compassionate considerations:

Having said that, it’s also worth discussing the other important matters as far as the implementation of section 137Q is concerned:

In conclusion, the policy states that decisions made under S137Q are to be resolved between the Department and you, the visa holder.  The employer who nominated you can provide information to the Department but they do not have a say in the decision-making process.

If it will come to the point where the DIBP considers the eventuality of canceling your visa, they will need to contact you to give you the chance to present your side of the story.

After everything is said and done about the matter, the government of Australia remains considerate and forgiving even to those who have supposedly not been transparent and faithful in their intentions of applying for the RSMS visa or other visas for that matter.

RSMS visa is one of the most popular subclasses of Australian permanent visas there are.  We’re pretty sure you have several questions about it in mind, especially where visa cancellation is concerned.  In that case, please don’t hesitate to give us a call or contact us at Nowak Migration.  We’re only too happy to assist you with your concerns regarding your visa, in particular, or migration, in general. Feel free to leave a comment or ask the question below the article, and don’t forget to subscribe to our newsletter.

How many countries in Australia 🤔

24 thoughts on “Can RSMS visa be canceled?”