What’s the difference between deportation and removal? 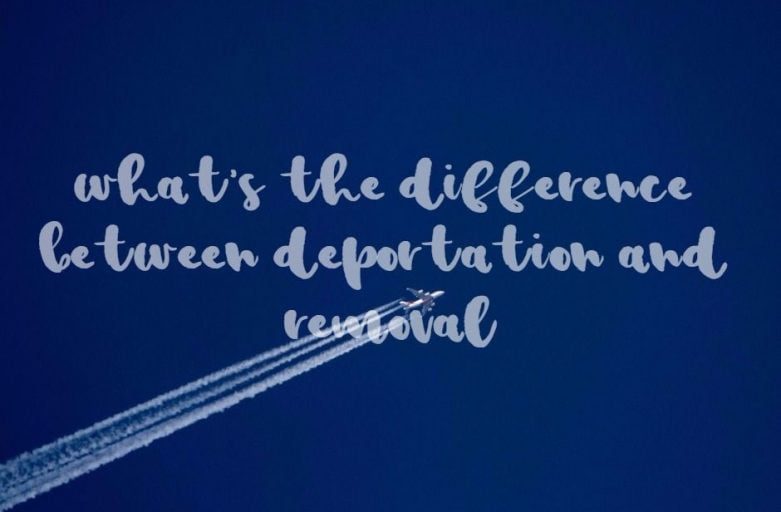 A person living in Australia can be removed in two ways: through deportation or removal.

You may ask: What’s the difference between the two?  How is each of these processes carried out?

The most fundamental difference between the two is this: Deportation requires a specific order, while removal does not.  In the case of the former, the deportation order is done under section 206 of the Migration Act 1958.

Let’s discuss first the process of removal and the individuals who may be affected by it.

If you happen to be a foreign national, who is not a citizen of Australia and living here without official authorization, your stay is deemed illegal.  Therefore, to be able to stay here lawfully, you have to have the government’s official authorization, which is in the form of a valid visa.  Failure on your part to produce this important document renders you an unlawful non-citizen.

If the government finds you staying here illegally, they will detain you and send you back to your country of citizenship or to your habitual residence.

What Constitutes an Unlawful Stay?

Illegal stay can happen in any of the following ways:

The manner, however, in which you are dealt with by the Department of Immigration and Border Protection (DIBP) — including whether the DIBP authorities will detain you or not — will depend on the circumstances surrounding your case and whether your continued presence in the country poses serious threat to the lives and well-being of the individual Australians and the community where you are in as a whole. Ministerial Direction 65 deals with this matters.

Removal is involuntary.  Hence you should avoid it at all costs.  If you can find a way to obtain a temporary visa before your departure from the country, that would be laudable. Usually Bridging Visa E (BVE) serves this purpose.

There is also a less disgraceful way of handling this embarrassing situation: You fly out of the country yourself before the authorities forcibly detain you and eventually remove you. In such a situation you’ll very likely get a few years ban while at the airport.

Deportation, on the other hand, is a bit trickier than removal.  For one, it requires a deportation order as already stated earlier.  This is because the process is applied to permanent residents and certain citizens of New Zealand (so-called eligible New Zealand citizens).

If you happen to be a subject of deportation, what might possibly cause it?  There’s a myriad of possible reasons why your visa can get canceled and put you in hot water.  But the most obvious and common one is when you commit a serious crime, get convicted of it and spend time in jail for more than 12 months.  Another common ground for possible deportation is when the government finds you to be a security threat to Australia and its citizens.

How Is Deportation Done?

If the government issues a deportation order against you, the authorities will arrest you immediately.  They don’t need a warrant to do it.   They will also give you an initial period of 48 hours to show that a mistake has been made and that the order applies to another person.  If you, however, fail to prove it, they will take you to the immigration detention pending your formal deportation from Australia.

In case you are already in prison, the personnel from the Department of Immigration and Border Protection will take custody of you.

Whether the government removes or deports you, they will demand payment from you for the expenses they incur.  The amount may be huge.

Consequences of Being Removed or Deported

If you have been a subject of removal or deportation from Australia as a result of any of the grounds discussed earlier, you may find it difficult to return to the country.  Certain considerations may apply, however, depending on the conditions of your case.

For instance, if you happen to be a tourist who opted to stay despite the expiration of your visa but agreed to leave voluntarily when told to do so, a 12-month ban may be imposed on you.  On the other hand, if you were a permanent resident whose visa got canceled for failing the character test and you were consequently removed or deported, the government will not allow you to return here.

(You can find more information on the lengths of time the people deported or removed are allowed to return to Australia on Schedules 4 and 5 of the Migration Regulations 1994.)

There are hopes for non-permanent bans to be lifted depending on certain circumstances.  An example of that is when a minister is satisfied that “compassionate or compelling” circumstances exist in the particular case.  Even then, it can be a daunting task as it involves complicated processes and factors.

If you have concerns and issues about the topic that we have just discussed, feel free to touch base with us at Nowak Migration.

You can always call us, send us a message via email or through the Contact Us tab of our website or join our forum on Facebook.

6 thoughts on “What’s the difference between deportation and removal?”