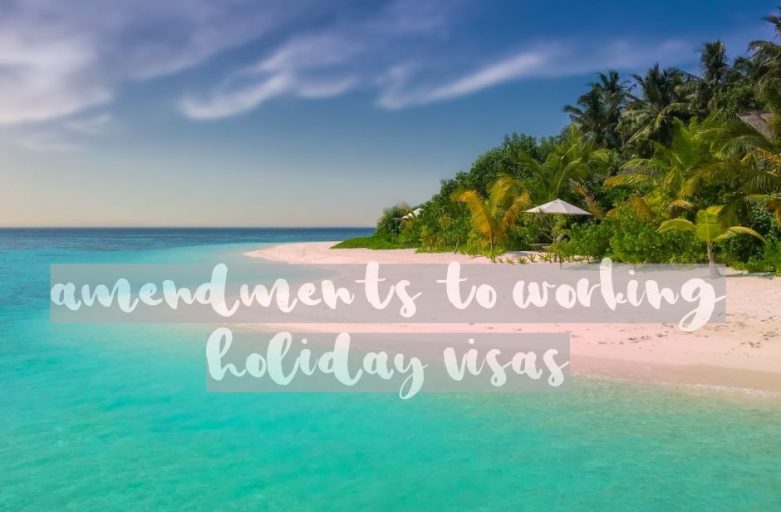 Here’s a piece of good news for backpackers Down Under 🏖️

Christmas comes early to you if you are a backpacker or planning to go backpacking in Australia.

This is because the government of Prime Minister Scott Morrison is set to relax the requirements for working holiday visas for backpackers and the Seasonal Worker Program (SWP) for the citizens of the neighboring Pacific islands.

The decision comes on the heels of farmers clamoring for more workers to pick their fruits and crops.  Obviously, the urban industries are not the only ones reeling from the ill effects of the shortage of qualified workers.  The agriculture sector is as affected as well.

The said move will result in the lengthening of the stay of the holders of visa subclass 417 and subclass 462, and those who avail of the SWP.  And the adjustment in the period of stay is not something to sneeze at – it’s three times that of the current provision, that is, if you undertake extra work in the agriculture sector.

Yes, the different businesses and industries in urban Australia are not the only ones that are on the hunt for workers.  The agricultural sector is in short supply of able personnel, too.  And the need seems urgent: farmers have to fill job shortages soonest to avoid losses in their farms.

Again, the national priority is to get as many local laborers to get the job done, but it seems that it is not possible given the scale of the work as opposed to the qualified Australian workforce.  Hence, the attention of the government shifts outside of the country as what is happening in other sectors.

It goes without saying, providing longer duration of stay for the holders of working holiday visas is seen as the immediate answer to the pressing problem facing the farmers.

With the implementation of the new amendment, backpackers like you will no longer leave your job every six months.  On top of that, you can triple your length of stay here if you undertake agricultural work.  Furthermore, the age limit requirement for working holiday visas for certain countries will be raised to 35.

As to the workers coming from the Pacific islands who are here on the strength of the SWP, they can stay three months longer.

Indeed, the problem of the farmers is a pressing concern not only of the agriculture sector but of the whole country as well given the fact that the plant and animal industries of Australia have grown almost twice in value over the last ten years or so. Thus, it needs to be taken seriously, and its problems resolved immediately.

The impact of backpackers on the economy

It is wise for the government to take seriously the contribution of the working holiday visa holders because there are close to half a million backpackers spending their time in the country every year.  With this figure, Prime Minister Morrison is looking at generating about one billion dollars in spending from them, which will help a great deal in propping up an already robust economy; this while providing support to the farmers.

The prime minister said that the backpackers will go back to their home countries without any money in their pockets; they spend their money here.  Hence, it’s all good for the whole economy.  Add to that the tax that the government imposes on their income while working here.

In the same vein, there are calls from some groups to scrap the 15% working holiday tax levied on the backpackers to entice more foreign nationals to come here to work, but the country’s leader is not keen on the idea.  According to him, when foreign holidaymakers come here to work, they should pay tax.  He added that we all pay tax when we work, hence there’s no reason working holiday visa holders are exempted from the rule.

Indeed, the recent announcement constitutes an attractive proposition for the Commonwealth Government and its farming sector.

This also comes on the heels of the call of some groups to come up with an agricultural visa to support their sector.  But the process towards achieving that objective is not an easy one. It will take time, effort, resources and tons of energy among the concerned individuals in the deliberation alone.

But the fruits, the crops, and the animals cannot wait for the agricultural visa before they are harvested.  Therefore, in the meantime, the government just has to make do with the adjustments in the existing visas where possible.

Again, the urgent need is to have good workers who can pick the fruits and the crops.

So, what are the changes to the working holiday visas as announced by Prime Minister Morrison?  Here they are:

Amendments to the Seasonal Worker Program

As far as the Seasonal Worker Program is concerned, these are the following changes to its provisions:

We bet you’re now raring to come here to avail of the perks offered by no less than Prime Minister Morrison.

Truly, obtaining a visa subclass 417 or subclass 462 is tantamount to hitting two birds with one stone: While you enjoy your stay in one of the prime tourist destinations in the world, you also get the opportunity to earn.

Earning while vacationing – there’s nothing better than that.

So, what keeps you from getting your working holiday visa for Australia now?  Are you pressed for time?  Or you don’t have the patience to go through the nitty-gritty of the visa application process?  Or you’re not confident you’ll do it right?

If that’s the case, don’t hesitate to keep in touch with any of our staff or consultants at Nowak Migration.  We’re always willing and ready to answer your every query and give you expert advice on how to go about lodging a successful visa application.

You can be assured of our transparency and honesty in transacting business with you.  Our growing list of loyal clients can attest to that.

If you want to keep abreast of the developments on Australian migration as well as on the overall business situation of the country, please subscribe to our newsletter by filling out the form below.  Don’t worry about spam; we take extra care of your privacy as you do.

Finally, if you think this article can help someone you know, please share it with them through any or all of the social media sites that we are using.  We will certainly appreciate your effort.

How to get PR in Australia without IELTS

Why do people migrate to Australia